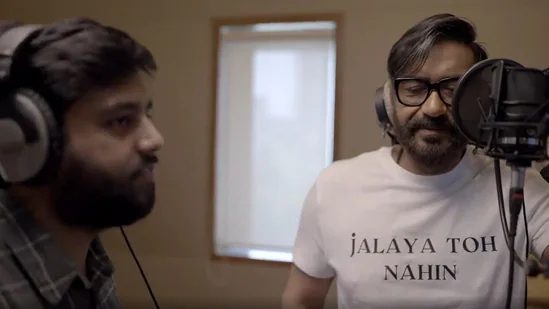 Ajay Devgn is gearing up for the release of his latest movie, ‘Runway 34’, a movie which he has produced, directed and starred in. The movie also stars Amitabh Bachchan, Rakul Preet Singh and Boman Irani and will release in theatres on April 29.

Just a few days ahead of the release of the movie, Ajay Devgn has even turned rapper along with Yashraj Mukhate, a popular social media influencer. Ajay’s rapper avatar is part of his promotions for ‘Runway 34’.

Yashraj Mukhate is well known for his musical remixes of dialogues and has had his fans dancing along to his tunes and this is his one-of-a-kind collaboration with Bollywood star Ajay Devgn.

For the unversed, Yashraj Mukhate is the one who made the viral remix of Kokilaben’s ‘Rasode mein kaun tha’ remix.

‘Runway 34’ is a movie that is said to be a fictionalised adaptation based in true events, and it revolves around Captain Vikrant Khanna whose flight takes a mysterious course after its scheduled take-off from an international destination.

The movie is about an investigation about the mystery course of the flight and much of the film is about the face off between Ajay Devgn and Amitabh Bachchan (who is the lead investigator).

Over the course of the movie, the audience will be taken on a roller coaster ride between fiction and fact as the true events of what happened on the flight unravel.

This is Ajay Devgn’s first time directing the superstar legend of Bollywood. Rakul Preet Singh plays the co-pilot and as per makers, this is a never-before-seen role for her too.