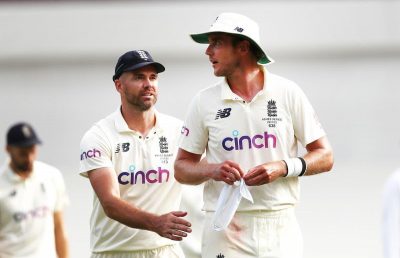 Veteran paces James Anderson and Stuart Broad will be considered "available for selection" for the first Test of the summer, against New Zealand at Lord's on June 2, Rob Key, the new director of the England men's team said on Thursday.

Despite their combined haul of 1177 Test wickets, the futures of both Anderson, 39, and Broad, 35, had been up in the air ever since England's 4-0 Ashes loss. They were not picked in the England squad for the West Indies tour, where Joe Root's side lost 1-0.

However, Key — speaking for the first time in his new role — said that he had taken soundings from Root's newly appointed successor, Ben Stokes, with both men agreeing that if Anderson and Broad are fit and in form come the start of the international season, then they will be back in the frame.

"Before I was announced in this job, I rang Jimmy and Broady and said 'For my money, you boys are available for selection for the first Test of the summer'," Key told the BBC.

"That's fine, but I'm the managing director. What they want is the captain to go with that. One of the first things Ben Stokes said was 'Jimmy and Broady are coming back' and I agree. It might've been a different story had we not agreed. But it wasn't up for debate," he added.

Broad returned to action for the first time this season in Nottinghamshire's ongoing Championship fixture at Trent Bridge, claiming a wicket in his third over as Worcestershire were bowled out for 159 on the opening day. Meanwhile, Anderson took two early wickets for Lancashire against Hampshire at the Ageas Bowl, having found his groove during an innings win over Gloucestershire at Old Trafford last week.

"They've got their plans in place. We don't need to tell Jimmy and Broady what they need to do, or how they need to prepare for a Test match. If they don't know now, no one will. And they've got to be right and up for selection for that first Test. And I don't see any reason why they wouldn't and they got a big part to play," said Key.

Although the timeframes are tight, with just over a month to go until the first Test against New Zealand, England men's team director is "optimistic" that a new head coach can be appointed before the series gets underway. Simon Katich is believed to be among the frontrunners, with Graham Ford and Gary Kirsten also in consideration, but with Stokes — "the best person to lead England forward" — now installed as captain, Key is confident that the team's new framework will take shape quickly.

"There's some good names coming in from English cricket and world cricket.I'm trying to find out about the ones I might not know so much about. A lot of it comes not from sitting across a room asking him what sort of coach you are, but actually asking people that have worked with him," he said.