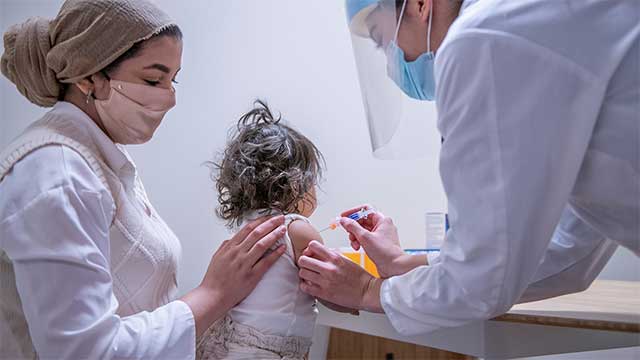 Antibiotic use in children in the first two years of age is associated with lower vaccine-induced antibody levels to several vaccines, reveals a study.

Several studies have suggested a negative association of antibiotic use with vaccine-induced immunity in adults, but data are lacking in children, said researchers from the Rochester General Hospital Research Institute in the US.

The findings published in the journal Pediatrics showed antibody measurements diphtheria-tetanus-cellular pertussis (DTaP), inactivated polio (IPV), Haemophilus influenzae type b (Hib), and pneumococcal conjugate (PCV) vaccines were lower in babies who took antibiotics compared to those who did not. These vaccines are aimed at controlling whooping cough, polio and other diseases.

"Antibiotic use in children below two years of age is associated with lower vaccine-induced antibody levels to several vaccines," said Michael E. Pichichero, from the Hospital's Center for Infectious Diseases and Immunology.

In the study, the team observed 560 children aged between 6-24 months; of which 342 had antibiotic prescriptions while 218 did not.

The results showed that vaccine-induced antibody levels to several DTaP and PCV antigens were lower in children given antibiotics.

A higher frequency of vaccine-induced antibodies below protective levels in children given antibiotics occurred at 9 and 12 months of age.

The drugs can disrupt gut bacteria, which appear to play a part in the body's response to vaccines, ScienceNews reported.

The theory has been proved in studies conducted on mice, where antibiotics hampered the immune system's response to vaccines. A similar study in humans published in the journal Cell found that antibiotics dampened adults' response to the flu vaccine in those whose prior immune memory for influenza had waned.

The study provides another cautionary tale against overusing antibiotics, but "in no way does this study imply that children who need an antibiotic shouldn't get it," Pichichero was quoted as saying.

But if possible, it should be a narrowly targeted antibiotic for a shorter course. In addition to the risk of antibiotic resistance, the overuse of the drugs can "have clinical implications for every individual child," he added.