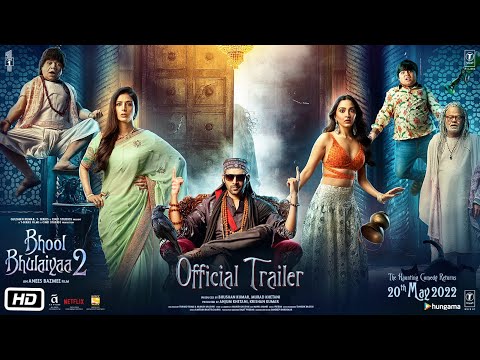 ‘Bhool Bhulaiyaa 2’ has been directed by Anees Bazmee and features Karthik Aryan, Kiara Advani and Tabu as the main cast.

The movie has been produced by Murad Khetani and Bhushan Kumar of T-Series and is all set to hit the big screens on May 20, 2022.

The trailer released today showcases the perfect blend of comedy and horror, so there will be plenty of thrills, spills and chills served with dollops of laughter as is seen in Karthik Aryan’s banter in the movie.

The trailer provides just enough of an insight into the story while keeping the curiosity quotient intact. The trailer is intriguing and entertaining and will make those who watch it want to watch the movie when it hits the big screen. The movie also stars Rajpal Yadav and Sanjay Mishra in important roles.

Karthik Aryan had to fill the impossibly big shoes of Akshay Kumar who did an outstanding job in the first instalment of the movie. ‘Bhool Bhulaiyaa’ was a blockbuster and Vidya Balan and Akshay Kumar in particular delivered standout performances in the movie. Judging by the trailer, Karthik Aryan seems to have brought his A-game for this role, Kiara Advani seems reasonably suited up as well and Tabu never disappoints.

Rashmika Mandanna dances with Govinda on...