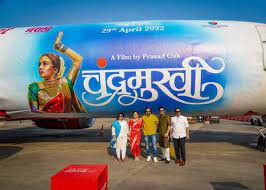 As the Marathi film 'Chandramukhi' released on Friday, the dancers led by the film's lead actress Amruta Khanvilkar descended on Mumbai's airport runway and formed an orchestrated flash mob to recreate the onscreen magnificence of the film.

The makers also tied up with an airline to brand their B737 MAX's fuselage with their film 'Chandramukhi's creative featuring Amruta in a dance pose. Inspired by the iconic Tamasha style, the troop gave a surreal performance on the film's hit song 'Chandra'.

Commenting on the occasion, Amruta Khanvilkar said, "This film has given me a once in a lifetime experience. I was delighted to get the chance to bring the onscreen magic offscreen through this performance."

The film's lead actor Addinath Kothare was equally impressed as he said, "Showcases such as these are a befitting nod to our film. The makers are leaving no stone unturned when it comes to giving 'Chandramukh' a big bang launch and I'm grateful to be a part of this experience."

Producer Akshay Bardapurkar said "We want to live up to the film and audience expectations. Time and again, through our experiential promotions we want to communicate that we have believed in a dream, and made that come true."

'Chandramukhi' is set in the riveting '80s and tells a love story which leads to a collision of two very different worlds of Politics and Tamasha. The music and score for the film has been crafted by the duo Ajay-Atul creation.

Helming the project as director, Prasad Oak commented "'Chandramukhi' will change Marathi Cinema forever. I am glad we are able to give it the platform it deserves."