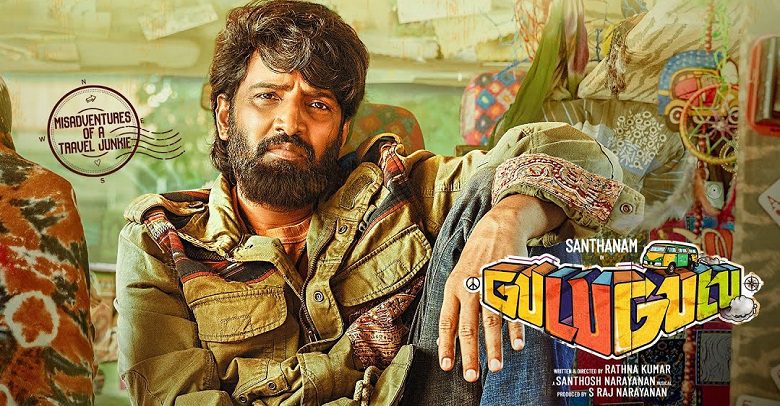 Rathna Kumar's 'Gulu Gulu' is a dark comedy that by and large works, primarily because of the manner in which the story is told and more importantly, because of the way Santhanam, who plays the lead character of Google, is presented in the film.

In fact, don't be surprised if 'Gulu Gulu' goes down as a landmark film in Santhanam's career for, it presents a different side of the actor, hitherto unknown to audiences and even to many of his fans.

'Gulu Gulu' is a story about a wanderer called 'Google' (Santhanam). A Venezulan by birth, 'Google', who has widely travelled and knows 13 languages, chooses to stay in Tamil Nadu and speaks Tamil. Life has always been harsh, cruel and unfair to Google but he has nothing but kindness and help to offer in return.

The story has two subplots that eventually combine into one. The first plot revolves around a young woman called Matilda (Athulya Chandra) who wishes to see the face of her dead father one last time. Her vicious step-brothers, however, are determined not to let that happen. They hire a bunch of simpletons to kidnap her.

The second plot revolves around a bunch of four selfish, ungrateful friends, who hatch a kidnap plan to find out if the dad of one of them really loves his son. Both these plots eventually combine into one major plot with 'Google' in the thick of things. What happens then is what 'Gulu Gulu' is all about.

Santhanam's performance as 'Google' in this film is just perfect. The man, who has until now only appeared in roles where he looks to speak a lot, mock and ridicule others and crack crude jokes is silent for the most part in this film. In fact, on the contrary, he is even the butt of a couple of jokes.

Understanding, soft-spoken and kind, Santhanam's character simply wins your heart. The characterisation is so refreshing and welcome that it makes you wonder why the man never thought of doing such characters before.

The film also has great performances coming in from some of the other members of its cast. Mariyam George is funny and brilliant as Ilangaiyan in the film. Pradeep Rawat as the villain David is also outstanding.

Black comedies demand great writing and perfect timing. Rathna Kumar's 'Gulu Gulu' has, by and large, both of these.

Be it humour, romance or action, the manner in which each of these segments have been dealt with in this film is refreshingly fresh.

Sample this. A cop in a patrol vehicle throws his weight around, insulting and abusing common people. A woman begging for alms, with a child in her hand, is physically manhandled by the cop for no fault of hers.

When a kind-hearted Google offers to attend to her injuries, she breaks down, her dignity and self respect making her seethe with anger. She asks him if he can slap the cop in public. How Google does that wins your admiration.

It is not that the film does not have its drawbacks. It has. The film becomes a drag in some places in the first half. Too many characters in the plot also make it quite difficult for audiences to follow the plots.

Santhosh Narayanan's music is a mixed bag for this film. While the background score is neat and apt, the songs are unbearable. If you are the kind who likes to listen to mellifluous numbers, you may be in for a rude shock. But set these aside and you have a decent entertainer to enjoy.

The highlight of 'Gulu Gulu' is that while it looks to entertain, it also looks to gently, yet firmly convey the message that kindness is what matters above everything else. And just for that, Rathna Kumar deserves a round of applause.