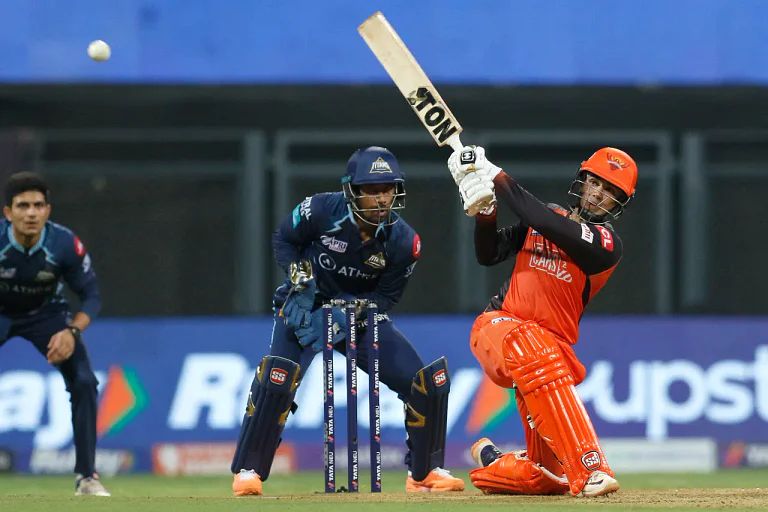 Brilliant fifties by Abhishek Sharma (65 off 42), Aiden Markram (56 off 40) and a late blitz by Shashank Singh (25 not out off 6) powered Sunrisers Hyderabad to 195/6 against Gujarat Titans in an IPL 2022 match at the Wankhede Stadium, here on Wednesday.

After winning the toss and opting to bat first, Mohammed Shami drifted down the leg side to SRH opener Abhishek Sharma twice in the opening over of the innings to concede 11 runs. Left arm pacer Yash Dayal, who came to bowl next over, was struck for two fours by Abhishek as Hyderabad raced to 22/0 after the end of 2 overs.

However, Shami made a brilliant comeback by dismissing SRH skipper Kane Williamson (5) on an incoming delivery. Rahul Tripathi (16 off 10), who came to bat next, was dropped by Rashid Khan when he was on 0. The right-handed batter took advantage of that reprieve and smashed Shami for a six and two fours off successive deliveries before the veteran pacer trapped him in front of the stumps to leave SRH at 44/2 after 5 overs.

From there on, Abhishek and Aiden Markram did the rebuilding job for Hyderabad.Though they were not able to find regular boundaries, both Abhishek and Markram rotated the strike as much as possible and kept the SRH run-rate steady.

After spending enough time in the middle, Abhishek decided to free his arms and hit his former teammate Rashid Khan for two sixes in the 12th over and brought up his half-century off 33-balls. On the other hand, Markram was targeting the likes of Alzarri Joseph and Lockie Ferguson for boundaries at regular intervals.

With five overs to go and both batters set, SRH were cruising towards a big score but an off-cutter from Joseph got rid of Abhishek, who departed for 65 off 42, leaving SRH at 140/3 in 15.1 overs. Nicholas Pooran (3), the next batter couldn't do much and was dismissed by Shami in his comeback spell.

Despite losing quick wickets from the other end, Markram continued his innings with the same force and reached his half century. But he couldn't give the finishing touch to SRH innings, getting out on a slow ball from Yash Dayal on the last delivery of the 18th over.

Gujarat Titans pulled things back by getting rid of Washington Sundar, who was run out at the non-striker's end but the likes of Shashank and Marco Jansen had saved their best for the last over.

Getting his first proper chance to bat despite featuring in the eleven in the last few games, Shashank made the most of the opportunity and smashed three sixes off Ferguson while Jansen also hit a maximum as 25 came off the final over and SRH finished with 195/6 in 20 overs.