IPL 2022: No time to dwell in past, says DC’s Rovman Powell ahead of their clash with KKR 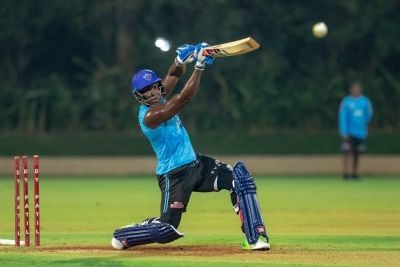 Delhi Capitals' power-hitter Rovman Powell on Tuesday stated that his side has now got no time to think about mistakes in the past matches and instead should focus on future encounters to have a chance of qualifying for the IPL 2022 playoffs.

At the halfway mark in IPL 2022, Delhi Capitals are currently in seventh place in the points table, with just three wins from seven matches. In their last match against Rajasthan Royals, Delhi fell short by 15 runs where the no-ball drama in the final over of the chase became a huge talking point which resulted in captain Rishabh Pant, all-rounder Shardul Thakur and assistant coach Pravin Amre (one-match ban) copping huge fines.

"It is something we have to put behind us very fast. We have a lot of games coming up, and we have no time to dwell in the past. You know, we have to always look to the future because some important games are coming up. Important games for us to win to qualify for the next round of the competition. We have no time to sit and think about what happened in the past," said Powell in a release by the franchise.

Powell, who smashed three sixes in the first three balls of the dramatic final over off left-arm pacer Obed McCoy en route to a 15-ball 36 which almost got Delhi home in a chase of 223, admitted that he too was hoping for the no-ball to be called by the on-field umpires in the final over.

"To be honest, I was pretty confident (at hitting six sixes in an over). After I got the first two, I was like what can happen from here, and then I got the next one. I was just hoping that it was a no-ball, but the umpire's decision is final, and we as cricketers take that and move on."

The knock of 36 from Powell, 28, was a much-needed one for the Jamaican who had been out of sorts in the tournament till the match against Rajasthan came.

"It felt good. I've been searching for that for the last few games, and it's finally good to see a few come out in the middle. It's just for me to take the confidence from that game leading up to the rest of the matches, and just transfer it to the next phase of the competition."

With Delhi set to face Kolkata Knight Riders at the Wankhede Stadium in Mumbai on April 28, Powell signed off by expressing that the time is ripe for Delhi to make big jumps in the points table to reach their goals in IPL 2022.

"It's some important games. We are at seventh in the table, and that is a good place to be at this point of the competition. It's just for us now to continue to climb the ladder and hopefully will reach our goal, which is the top four. Once we qualify for the top four, then we have a shot at winning the 2022 IPL."