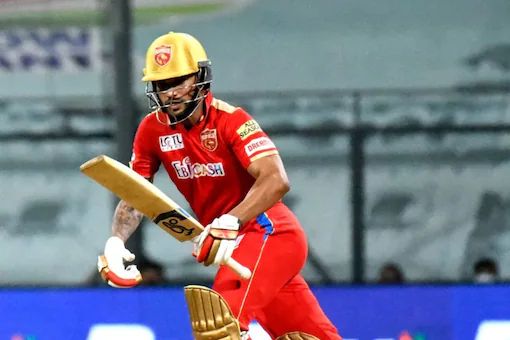 Seasoned opener Shikhar Dhawan struck his second half-century of the season and shared a 110-run partnership with Bhanuka Rajapaksa to guide Punjab Kings to a competitive 187/4 in 20 overs against Chennai Super Kings in Match 38 of IPL 2022 at the Wankhede Stadium here on Monday.

Dhawan scored an unbeaten 88 off 59 deliveries, hitting 9 fours and 2 sixes as he helped Punjab Kings to a defendable total after they were asked to bat first by Chennai Super Kings skipper Ravindra Jadeja.

After he lost his opening partner and skipper Mayank Agarwal (18) with the score reading 37, Dhawan found a willing partner in Sri Lankan batter Bhanuka Rajapaksa as they raised 110 runs for the second wicket partnership off 71 deliveries, setting the platform for PBKS's late charge.

Rajapaksa, who was dropped twice when he was on one and five runs, scored 42 off 32 deliveries, hitting two fours and two sixes and helping Dhawan take the score from 37/1 to 147/1 before he was out, caught by Shivam Dube off Dwayne Bravo.

It was a well-controlled innings as PBKS scored 37 runs in the first six overs, consolidated their position by adding 86 runs from overs 7-15 and then added 63 runs off the last five overs to set up a challenging total for Chennai Super Kings to chase.

PBKS negotiated the six overs of fielding restrictions making 37 runs for the loss of skipper Agarwal.

Agarwal, who struck Maheesh Theekshana for a four past the short third man with a delicate late dab and cut Mitchell Santner for another boundary, was caught by Shivam Dube off Theekshana, trying to cut a carrom ball but failing to keep it down.

Shikhar Dhawan then found a good partner in Rajapaksa, the Sri Lankan lived a charmed life, capitalised on two dropped catches to score 42. But more importantly, he figured in a 110-run partnership with Dhawan for the second wicket that helped Punjab Kings set up a platform for a late charge.

Dhawan started slowly, dealing in ones and twos but opened up his arms to hit Theekshana for a superb six in the 6th over, taking a big stride forward to loft an off-break turning away from off-stump over the short-leg boundary.

The former India opener despatched Mukesh Choudhary for two superb boundaries off successive deliveries and repeated the act a ball later, shuffling across the stumps and chipping away a delivery sent down the leg side as he completed his half-century in 37 deliveries, hitting five fours and one six.

He also struck Dwayne Bravo for two successive fours the first off a free-hit after the West Indian bowler landed the first delivery of his over outside the return crease outside off attempting to bowl a wide yorker. In the 19th over, the Delhi opener struck Pretorius for a neat four over short fine leg and also planted Bravo into the stands over the short leg-side boundary for a six.

Rajapaksa was dropped by Ruturaj Gaikwad off CSK skipper Jadeja as he goes down the track and plays uppishly only to see Gaikwad run from deep square leg, get both his hands to the ball but spill it.

Rajapaksa hammered Jadeja for a six through Mitchell Santner's hands at deep midwicket. He hit Bravo and his compatriot Theekshana for a four apiece and blasted Dwaine Pretorius for a big six, planting a wide full toss over Jadeja's head at long-off. Rajapaksa was out caught by Shivam Dube off Bravo as he tried to clear the long-off boundary on a slower one but could not get hold of it properly. But by that time he had done his job, helping Shikhar Dhawan take Punjab Kings to safety.