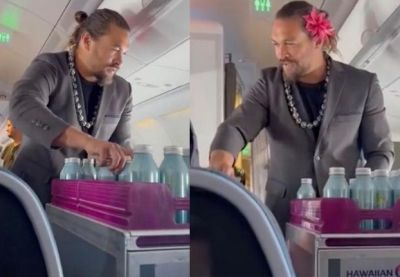 Hollywood star Jason Momoa made a very special trip this week from Los Angeles to Hawaii. He also made it a never-to-forget trip for the passengers on the flight.

The actor was travelling to Hawaiian Airlines to celebrate the airline's partnership with his water company Mananalu.

TikTok user @livinglikekylee posted a video their aunt sent of Momoa handing out the bottles. The video had the caption, "When Jason Momoa is your flight attendant."

The 'Aquaman' actor also documented the special occasion on his Instagram page with his own video footage.

"Bright and early. It should be a good day. I'm going home to Hawaii with the babies, and we're doing something really cool, very cool, something like how it all started," he said.

The "babies" Momoa was referring to are his daughter Lola Iolani, 14, and son Nakoa-Wolf, 13.

Of his inspiration for the activation, he explained that he questioned why he would always see plastic single-use water bottles on flights.

"It's a dream come true…why can't we have aluminum? There's sparkling water, there's sparkling beer, there's soda, soft drinks. Why do I have to have this little single tiny water? So this is my first time being able to do this. So I'm going to make the announcement on Hawaiian Airlines…I'm excited I'm going home."

In his caption, Momoa described his ultimate goal, and wrote: "My idea to create @Mananalu.water came to me while on a flight. I'm grateful for your support and it's an honor to have Hawaiian Airlines be the first airline to partner with Mananalu. We're on a mission to end single-use plastic."