Look out for these 5 highly-anticipated OTT shows 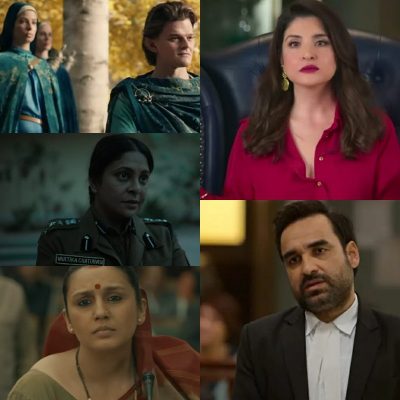 The world of OTT is churning new content at lightning speed. Each passing day, a new web series or film is being announced or dropping on one OTT platform or the other.

As August nears its end, IANS takes a look at some of the highly-anticipated web series that are premiering in the coming days on different platforms.

The first to land on the OTT platform is the second season of the Huma Qureshi-starrer political drama 'Maharani'. The multi-season drama tells a fictional story, but is inspired by the political upheaval in Bihar in the 1990s when the then Chief Minister Lalu Prasad made his homemaker wife Rabri Devi his successor.

The second season of the show, which sees Huma playing the lead character of Rani Bharti, will see Bheema Bharti (played by Sohum Shah) stepping out of jail, and clashing with his wife Rani in pursuit of power.

'Criminal Justice' is one of the most loved Indian shows in the OTT space. The upcoming season will see Pankaj Tripathi reprising his role as advocate Madhav Mishra facing the toughest case of his career. He will be squaring off in the courtroom with assistant public prosecutor Lekha, played by Shweta Basu Prasad.

Third on the list is the second season of the hugely popular cop drama 'Delhi Crime'. The first season of the Richie Mehta-directed series told the story of the 2012 Delhi gang-rape which shook the conscience of the nation and led the Parliament to pass the Criminal Law (Amendment) Act, 2013 (Nirbhaya Act), which bolstered the provisions of the Indian Penal Code, Indian Evidence Act, and Code of Criminal Procedure with regard to sexual offences.

The show, which is said to be inspired by the hit international series 'The Real Housewives', takes into account the personal and professional lives of Neelam Kothari, Maheep Kapoor, Bhavna Pandey and Seema Khan, wives of Bollywood actors Samir Soni, Sanjay Kapoor, Chunky Panday and Sohail Khan, respectively.

Lord Of The Rings: Rings Of Power – September 2 (Prime Video)

The epic drama is set thousands of years before the events of J.R.R. Tolkien's 'The Hobbit' and 'The Lord of the Rings' books, and promises to take the viewers back to an era in which kingdoms rose to glory and fell to ruin with unlikely heroes being tested.

One of the greatest villains, which came out of Tolkien's ink, will threaten to cover all the world in darkness. The starcast of the series was recently in Mumbai where they soaked in the colours of the city which is known for its heritage and hustle culture. 'Lord Of The Rings: Rings Of Power' will release in English, Hindi, Tamil, Telugu, Malayalam and Kannada, with new episodes dropping in every week.