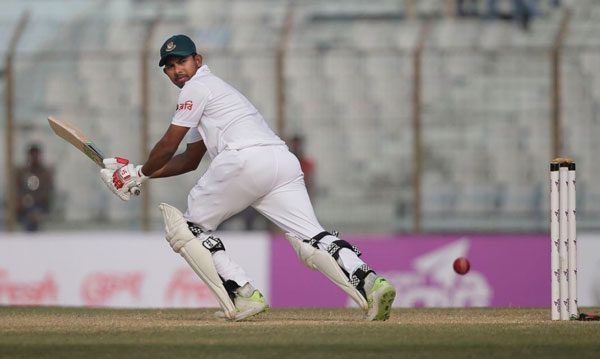 Mosaddek Hossain Saikat was on Friday included in the Bangladesh squad for the first Test against Sri Lanka, which starts on May 15.

Earlier, Nayeem Hasan was picked in the squad in place of the injured Mehedy Hasan but the decision to include Mossadek, who is not regular in red-ball cricket, was done in order to have more depth in their batting.

"Mossadek was injured after playing two first-class games so he could not play either in the National Cricket League or the Bangladesh Cricket League (the first-class competitions)," Habibul Bashar, member of the senior men's team's selection panel told Cricbuzz.

"We have included him as we feel if we play four bowlers then we might need someone who can bat down the order," he added.

The 26-year-old Mossadek, who played only three Tests in his career, last figured in a Test against Afghanistan in September 2019 in Chattogram. But he had performed well in the recently-concluded Bangabandhu Dhaka Premier Division Cricket League, the List A tournament, where he scored 658 runs as well as picked up 16 wickets in 15 matches for Abahani Limited.

The Sri Lanka cricket team will arrive in Bangladesh on May 8 for the two-match series which is a part of the 2021-2023 ICC World Test Championship. The first Test starts at the Zahur Ahmed Chowdhury Stadium (ZACS) in Chattogram while the second Test commences at the Sher-e-Bangla National Cricket Stadium (SBNCS) in Dhaka on May 23.