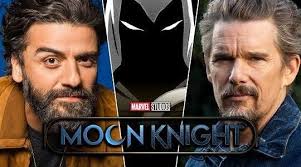 The video was posted on the official account of Disney+ Hotstar and both the stars came together to greet their fans.

Isaac is known for starring in films like ‘Dune’ and the ‘Star Wars’ franchise while Hawke is known for the ‘Before’ trilogy. Both these fans enjoy a loyal fan base in India.

In the video the two stars open with: “Namaste India and a very Happy Holi, this is Oscar Isaac and (I’m) Ethan Hawke and we are here to bring you one more reason to celebrate. Moon Knight, a brand new superhero story from Marvel Studios, is here,” the duo said. Hawke said the series promises a “whole new world of heroes and villains unlike anything you’ve ever seen before”.

“We’re excited to bring this new story to millions of fans in India and we hope that you love and enjoy it,” Isaac added.

‘Moon Knight’ is about Steven Grant (Oscar Isaac) who is a quiet gift shop employee who suddenly is troubled by blackouts and has rushes of memories of another life.

Steven later discovers that he has dissociative identity disorder (multiple personality disorder) and he shares his body with an alter ego – Marc Spector, who is a mercenary and elite soldier who takes up crime fighting when he becomes the human avatar of Khonshu, who is known as the Egyptian god of the moon.

‘Moon Knight’ is the latest offering from Marvel Studios and it will release on Disney+ Hotstar on March 30 in Hindi, Telugu, Tamil, Malayalam and English.

Here is the official trailer for ‘Moon Knight’: