Pritam: ‘Kesariya’ full song will be launched before ‘Brahmastra’ release 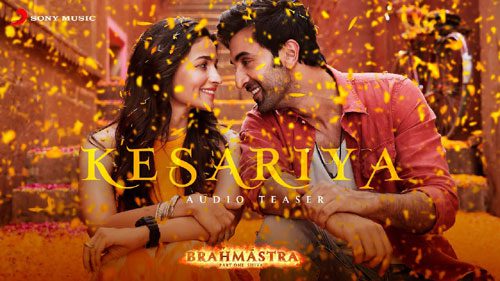 One of the most awaited releases of 2022 is Ayan Mukherji’s ‘Brahmastra Part One: Shiva’ which stars the now newlyweds Ranbir Kapoor and Alia Bhatt in lead roles. This is the first on screen pairing of the couple and just ahead of their wedding, on April 14, the makers of ‘Brahmastra’ unveiled the first song from the movie – ‘Kesariya’.

Now, music composer Pritam has assured that the whole song featuring Alia Bhatt and Ranbir Kapoor will be launched before the release of Brahmastra.

Pritam issued a statement on Wednesday, April 27 where he thanked fans for their overwhelming response to the first glimpse of the song. He also added that the full song will be launched before the release of the movie. "We are really excited that just a Teaser of our song 'Kesariya' from Brahmastra is getting so much love from you! I have been receiving many messages to drop the full song and we have even had discussions internally about it," he posted on his Twitter handle.

He further said, "However, we have a plan in place for introducing Brahmastra to the world… and we want to do it right.

So, we are focusing on the Trailer as the next big creative release for the movie, and Kesariya – The Full Song will be launched in the months closer to release. So please be patient 🙂 And a big, big thank you to everyone who has liked the Song Teaser! Excited to share the music of Brahmastra with you'll in the coming months !!!"

‘Brahmastra’ is Ayan Mukherji’s most ambitious project that has been in the making for nearly five years. Directed by him and produced by Karan Johar’s Dharma Productions, this movie is said to be the first of a trilogy. ‘Brahmastra Part One: Shiva’ also stars Amitabh Bachchan, Mouni Roy and Nagarjuna Akkineni and is set to release in cinemas worldwide on September 9, 2022.