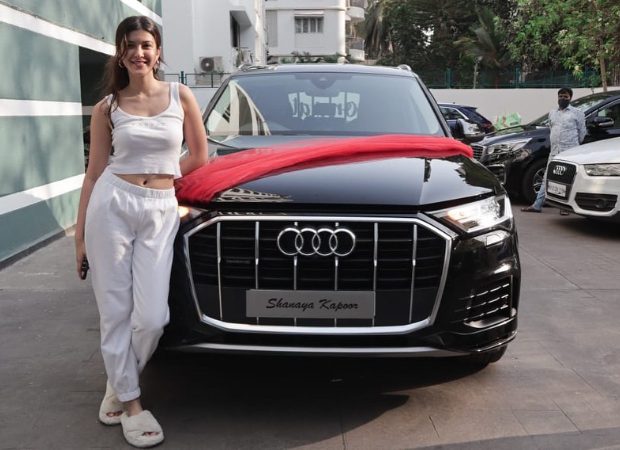 Actor Sanjay Kapoor and Maheep Kapoor’s daughter, Shanaya Kapoor was recently in the news as her debut movie, under the Dharma banner, ‘Bedhadak’ was announced.

It seems like the actress is already in a celebratory mode, even before the movie releases, or maybe she is simply that confident about the success of her debut, because according to latest reports, Shanaya has splurged on a new car – An Audi Q7, that costs a whopping Rs. 80 lakhs.

She has even gotten custom plates for her car. Sharing a series of pictures where she is seen posing with the car and also one where she as well as her parents are posing with their new ride, Shanaaya showed off the custom plate that display her name ‘Shanaya Kapoor’ in the front of the car.

The Audi Q7 2022 version reportedly comes in two variants – the Premium Plus which costs Rs. 80 lakhs and the Audi Q7 Technology variant that costs Rs. 88 lakhs.

Audi Mumbai also shared pictures of Shanaya Kapoor posing with her swanky new ride and shared it on their Instagram handle. Along with the picture, they wrote, “Glamorous and Charming daughter of superstar @sanjaykapoor2500”, @shanayakapoor02 is now a proud owner of the Audi Q7. We are happy to welcome you to the Audi Experience. #audimumbaiwest #shanayakapoor #audiq7 #sanjaykapoor #audiexperience”.