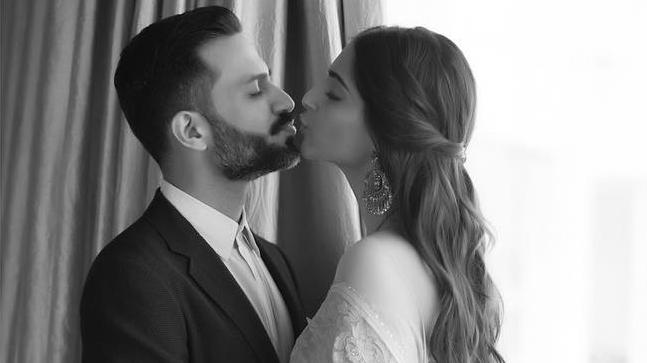 Bollywood actress Sonam Kapoor, daughter of veteran actor Anil Kapoor, has announced that she is expecting her first child with husband Anand Ahuja.

Both Anand and Sonam took to their social media to officially announce that they are expecting their first baby. The baby is due in fall of 2022. Sonam and Anand got married on May 8, 2018.

Sharing a series of monochrome pictures where Sonam is lying on Anand’s lap while both cradle her baby bump and share a laugh, Sonam wrote, “Four hands. To raise you the very best we can. Two hearts. That will beat in unison with yours, every step of the way. One family. Who will shower you with love and support. We can’t wait to welcome you.  #everydayphenomenal #comingthisfall2022.”

Anand is dressed casually in white and black while Sonam has worn a black bodysuit, both are full of smiles in the pictures posted on Instagram.

Among the first to congratulate them was Sonam’s ‘Veere Di Wedding’ co-star Kareena Kapoor, who said, “Wohoooooooo soooo happy for you both…can’t wait for the babies to play.”

We can expect a barrage of congratulatory messages from celebrities and netizens for Sonam who keeps her fans engaged with her social media feeds.

Sonam though was a firm believer in keeping her private life private and did not make too many comments on her personal life.

Since her marriage to Anand Ahuja, she moved to London where her business man husband is based.

She continued to act post her wedding, though she took on fewer projects. Sonam Kapoor will soon be seen in the movie, ‘Blind’.