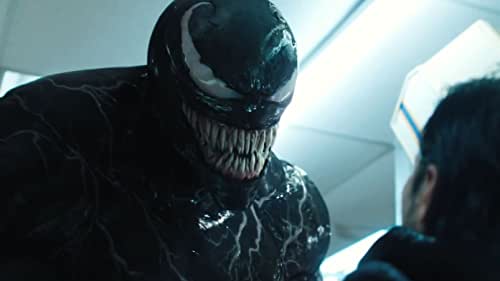 Sony Pictures has officially announced the third instalment of the Tom Hardy starrer ‘Venom’ franchise during their CinemaCon closing reel of future projects. The studio offered a small teaser of the movie’s logo.As per Deadline, Sony gave a teaser of Venom 3 during their closing reel at CinemaCon where they showcase their upcoming projects. The movie’s logo was teased was the briefest time in the closing sizzling reel.

The first two ‘Venom’ movies proved to be a blockbuster hit for Sony. Right now, there is no other information about writer, director and other cast members, but Tom Hardy is expected to be back to lead the franchise in the third installment as well.

Following the events of ‘Venom: Let there be carnage’ the movie’s return was teased in the end credits of ‘Spider-Man: No Way Home’ and with the teaser in CinemaCon it can be assumed that ‘Venom 3’ is a done deal.

Sony’s upcoming Marvel projects include – ‘Kraven the Hunter’ with Aaron Taylor Johnson and ‘Madame Web’ with Dakota Johnson, both of which are set to release in 2023, Sony will also be releasing ‘Spider-Man: Across the Spider-Verse’ in 2023.

During CinemaCon Sony also announced their plans for an El Muerto movie featuring musician Bad Bunny, which is slated for a January 2024 release. It is expected that ‘Venom 3’ will also be part of Sony’s 2024 release calendar.