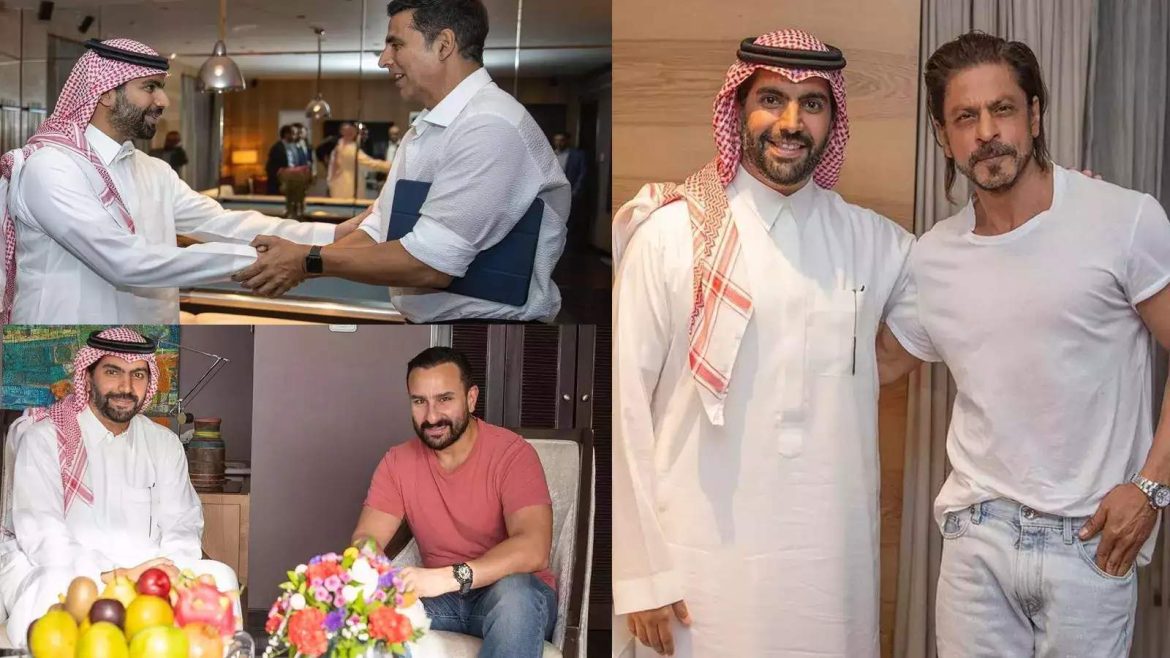 The big stars of the Hindi Film Industry – Shahrukh Khan, Salman Khan, Akshay Kumar and Saif Ali Khan recently got together and met with Bader Bin Farhan Alsaud, the Minister of Culture of Saudi Arabia.

The Minister of Culture shared details of his meet up on his social media. He uploaded the pictures on his twitter feed and wrote, “It was great to meet members of the thriving Indian film community including Bollywood superstars @iamsrk @BeingSalmanKhan @akshaykumar #SaifAliKhan and explore partnership opportunities together! #SaudiMinistryOfCulture #Saudivision2030.”

It was great to meet members of the thriving Indian film community including Bollywood superstars @iamsrk @BeingSalmanKhan @akshaykumar #SaifAliKhan
and explore partnership opportunities together! #SaudiMinistryOfCulture#Saudivision2030 https://t.co/IzYeYY9y4n

The details of when and where they met is not yet known. Meanwhile Shahrukh Khan is back in Mumbai after wrapping up the shoot for his upcoming movie ‘Pathaan’ in Spain. He recently also hosted the Chairman of the Red Sea Film Festival of Saudi Arabia, Mohammad Al Turki at his home (Mannat) in Mumbai recently.

Al Turki shared a picture of their meetup on his Instagram and captioned it, “Ramadan Greetings from India with my brother @iamsrk."

On the work front, Shahrukh Khan is geared up to complete his shooting for ‘Pathaan’ which is scheduled for release on January 25, 2023. Salman Khan is busy with shooting for ‘Tiger 3’ as well as ‘Bhaijaan’. ‘Bhaijaan’ was originally titled ‘Kabhi Eid Kabhi Diwali’ but since Sajid Nadiadwala bowed out of the production of the movie and Salman Khan Films took over the movie title changed to ‘Bhaijaan’.

Saif Ali Khan has two big projects due for release – ‘Vikram Vedha’ with Hrithik Roshan and ‘Adipurush’ with Prabhas. Akshay Kumar is the busiest of the lot with an array of projects in the pipeline including ‘Ram Sethu’, ‘Mission Cinderella’, ‘Raksha Bandhan’ and ‘Selfiee’ among others.